Come along to this important public meeting with Irish journalist and author David Cronin to find out more about the ways in which the European Union aids the Israeli occupation of Palestine and associated human rights abuses.

The meeting will be chaired by Dr. David Landy of the IPSC, academic in Trinity College Dublin and author of the new book Jewish Identity and Palestinian Rights: Diaspora Jewish Opposition to Israel.

The meeting takes place on Tuesday 26th July, at 7.15pm in The Pearse Centre, 27 Pearse Street, Dublin 2 (aka The Ireland Institute).

Entry is free, all welcome. 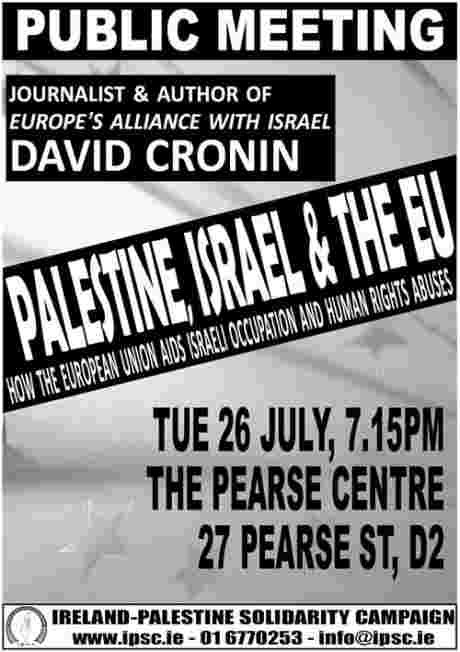 In official statements, the EU presents itself as an honest broker in the Middle East. In reality, however, the EU and its member states have been engaged in a process of accommodating the Israeli occupation of Palestine. A recent agreement for “more intense, more fruitful, more influential co-operation” between the EU and Israel has meant that Israel has become an EU member state in all but name.

However, rather than using this relationship to pressure Israel to end its human rights abuses, the EU has legitimised actions such as the ill-treatment of prisoners and the Gaza massacre, while granting the Apartheid State preferential trading status and funding opportunities, and purchasing military items ‘battle-tested’ on the Palestinian people. The Greek government’s grounding of Freedom Flotilla II is just the latest outcome of this increasingly close “special relationship”.

David Cronin is the author of the explosive book Europe’s alliance with Israel: Aiding the Occupation, a journalist with many online and print publications, and the man who has attempted to make citizen’s arrests of both Tony Blair and Israeli Foreign Minister Avigdor Lieberman.