Responding to the Palestinian call for organisations to announce International Women’s Day to be a day of solidarity with the administrative detainee Hana Al-Shalabi and all female prisoners and women in the families of Palestinian prisoners, the Ireland Palestine Solidarity Campaign is holding a solidarity vigil at the Spire on O’Connell Street, Dublin 1 from 4.30 to 6.30pm on Thursday 8th March. 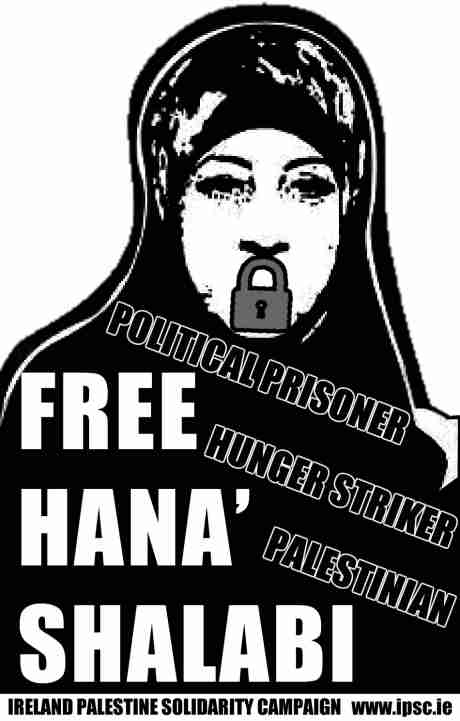 Hana’ has been on hunger strike for 20 twenty days in protest against the torture, assault and degrading treatment to which she has been subjected and against her ongoing detention without charge or trial. Hana’ was released under the prisoner swap last year, after being held without charge for two years. On 16 February, she was again interned without trial under Israel’s ‘Administrative Detention’ regime.

Hana’ was forcibly strip searched by a male soldier and assaulted, hours after soldiers brought her to Salem Detention Center following her detention. In the affidavit given to Addameer Lawyer Samer Sam’an, Hana’ described the forced strip search and assault at the hands of the soldiers of the Israeli Occupying Forces as “utterly degrading” and that what they did to her was “not acceptable in all customs of the world”. She subsequently began her hunger strike and was placed in solitary confinement.

The IPSC calls on people to support Hana’s hunger strike, for the rights of all Palestinian political prisoners unjustly held by Israel’s Apartheid regime.